Chris Breezy upset a few fans last night when he went to instagram with disheartening news. Brown, who was set for the 26 date “Between the Sheets” tour with Trey Songz and Tyga, was forced to push it back due to a failed travel request of not completing 100 hours of community service.

Although this probation has been ongoing since 2009, due to his  incident with Rihanna, Brown’s minor run ins with trouble and probation violations since then, aided in the judge ‘s decision of not granting the request.

“I would first like to apologize to all the fans and people who have been supporters of me and all the music over the years. The beginning of the BTS tour has been moved to later dates now. The judge would not sign off on my travel to do the tour until I finish these last 100 hours of community service. I promise that I am busting my ass doing it everyday until it’s complete. This is the most disappointing news I’ve gotten in a while.”

While many fans expressed they were upset for buying non-refundable concert and plane tickets, one fan received a personal message from Brown after she posted a reaction. 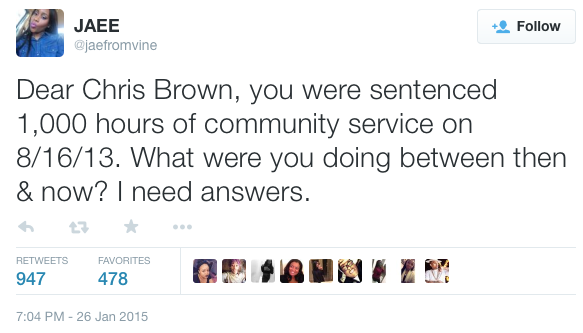 This confirms once again that Christopher was not born with a chill button. How do you feel about Chris Brown’s behavior?

Nikki Nicole became the driving force behind all of the Time2Grind platforms since 2011. Inspired to become an esteemed music artist, Nikki Nicole is proving that she can also become another female titan in the entertainment industry. Follow her on Twitter,Instagram and Facebook at Naswillshine .